When the coalition government drove through the Legal Aid, Sentencing and Punishment of Offenders Act (LASPO) in 2012, it faced huge opposition from the legal profession and also in the House of Lords. Ministers were warned repeatedly that the drive to cut £350m a year from the £2bn annual legal aid bill would deny access to justice to millions of people. Chris Grayling, who was Justice Secretary at the time, insisted the cuts were necessary.

The 2012 Act removed legal aid from entire areas of the law:

So, what has been the result of those measures? The cuts implemented by the 2012 Act took effect from 1st April 2013. Coming up are nine simple charts that show how many people had legal aid, or legal representation, each year this decade. Just look what happens from 2012-2013 onwards, each time…

Without legal aid, it’s harder for people to secure legal representation when going to court. In private law cases brought via Britain’s family courts, both the passing of the 2012 Act and its implementation in 2013 reduce the proportion of cases where both parties had lawyers – as well as cutting the number of cases coming to court by nearly a quarter in two years: 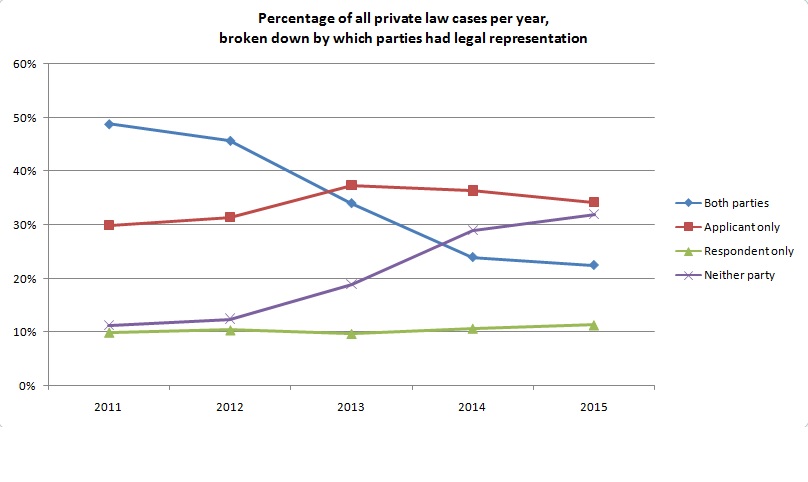 Among divorce cases involving financial remedies (what used to be called ancillary costs), respondents have been finding it increasingly hard to secure legal representation – although this appears to be a long-term trend:

Where financial remedies are not part of the divorce proceedings, cases where nether side has a lawyer are now the majority: 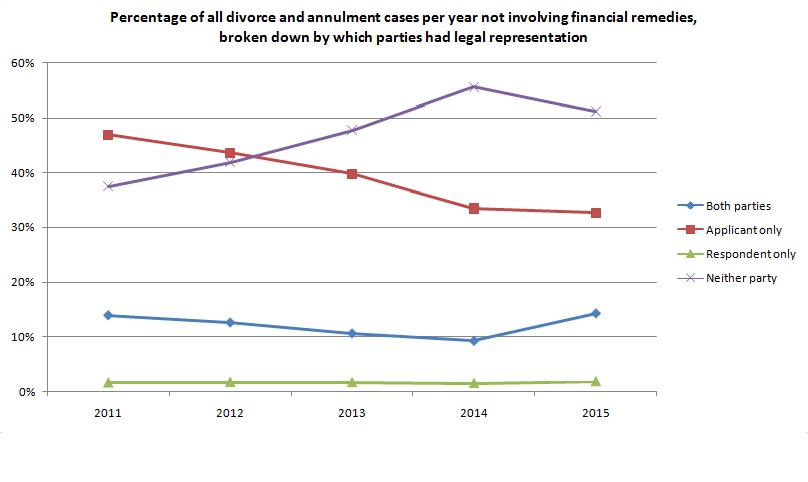 Plans to cut legal aid in criminal law cases have been abandoned by Grayling’s successor at the Ministry of Justice, Michael Gove. The criminal law legal aid caseload has fallen sharply, but this is likely to be due to falling levels of crime.

In the civil courts however – dealing with litigation, family law, immigration, everything that is not criminal – legal aid cuts have had an impact.

This is the number of claims for legal aid in civil law cases submitted each year since 2009/10, the last year before the coalition was elected: 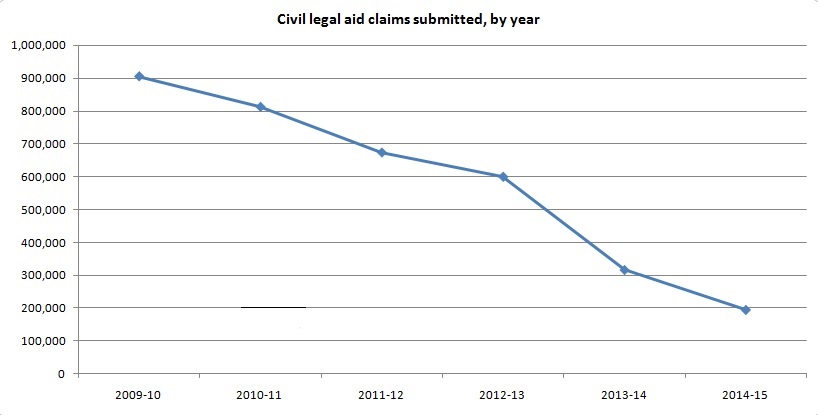 “Legal help” includes advice and assistance about a legal problem, but does not usually include representation or advocacy in proceedings. “Controlled legal representation” is representation in Mental Health and Immigration tribunals. The number of claims submitted in these cases show long-term declines sharpening after the 2012 Act takes effect:

Below is the breakdown of the “other non-family” claims in the chart above, among the four areas with the highest inividual caseloads:

In 2013, the Ministry of Justice responded to criticism of the legal aid cuts by telling the BBC: “In cases like divorce, courts should more often be a last resort, not the first. Evidence shows that mediation is often more successful, cheaper and less acrimonious for all involved.”

This is the effect the legal aid cuts had on mediation outcomes:

Legal aid caseloads had been falling before the 2012 Act was passed. Law firms had begun to withdrawn from taking legal aid cases, and administrative barriers to entry were already being raised. The 2012 Act did not start this. The figures are clear, however, that it has accelerated it, to the point where equal access to the courts has been wiped out in some areas of the law.